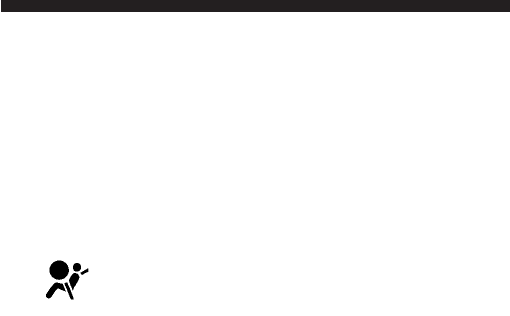 The Advanced Front Airbags will not deploy in all frontal
collisions, including some that may produce substantial
vehicle damage — for example, some pole collisions,
truck underrides, and angle offset collisions. On the other
hand, depending on the type and location of impact,
Advanced Front Airbags may deploy in crashes with
little vehicle front-end damage but that produce a severe
initial deceleration.
The side airbags will not deploy in all side collisions. Side
airbag deployment will depend on the severity and type
of collision.
Because airbag sensors measure vehicle deceleration over
time, vehicle speed and damage by themselves are not
good indicators of whether or not an airbag should have
deployed.
Seat belts are necessary for your protection in all crashes,
and also are needed to help keep you in position, away
from an inflating airbag.
The ORC also monitors the readiness of the electronic
parts of the airbag system whenever the ignition switch is
in the START or ON positions. If the key is in the LOCK
position, in the ACC position, or not in the ignition, the
airbag system is not on and the airbags will not inflate.
The ORC contains a backup power supply system that
may deploy the airbags even if the battery loses power or
it becomes disconnected prior to deployment.
•
Also, the ORC turns on the Airbag Warning
Light for four to eight seconds for a self-
check when the ignition is first turned on.
After the self-check, the Airbag Warning
Light will turn off. If the ORC detects a malfunction in
any part of the system, it turns on the Airbag Warning
Light either momentarily or continuously. A single
chime will sound if the light comes on again after
initial startup.
56 THINGS TO KNOW BEFORE STARTING YOUR VEHICLE
previous next