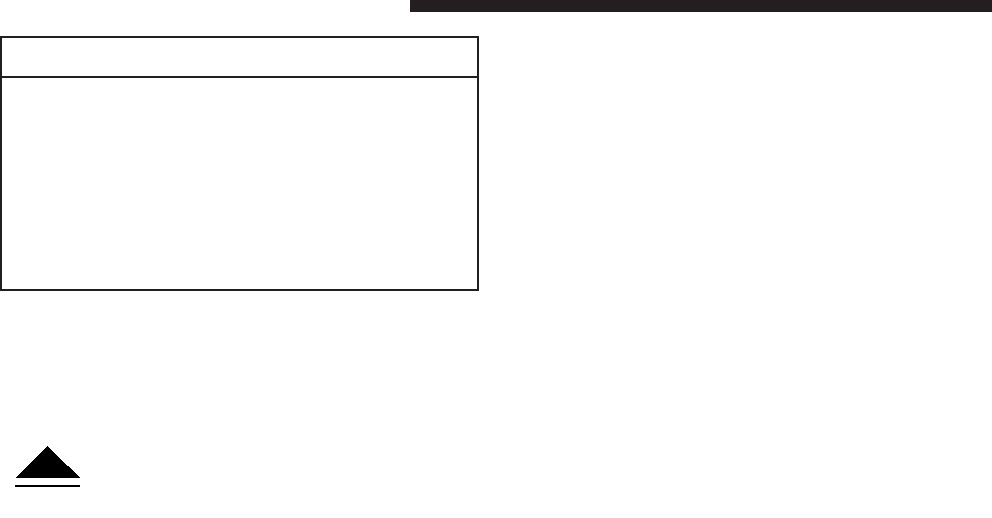 CAUTION!
Before inserting a CD, assure that a CD is not already
in the player. Press the CD button; if the display
shows NO CDS, a new CD can be inserted. If a CD
is already loaded, press and release the EJT button
and allow time for the current CD to be ejected.
Loading a new CD into the player while another CD
is already loaded can result in a jammed mechanism
which may require service at an authorized dealer.
Insert the CD into the slot with the printed side up. The
unit will display the number of tracks and total playback
time. After the last track has been played back, the unit
automatically begins to play the first track again.
To eject a disc, briefly press and release the
EJT button.
If the power is turned off, the disc will remain in the CD
slot for protection.
Features of the CD player:
•
Skipping Tracks
Turn the right rotary control/push button. Turn fur-
ther to the left or right to skip multiple tracks. If a track
was played for less than eight seconds, the system will
skip to the next track.
•
Scan Tracks (SC)
Push the right rotary control/push button until the
display shows SC. All tracks are played back for eight
seconds each. Press the button again to cancel this
feature.
•
Fast Forward/Rewind (<<, >>)
Press and hold the multifunction button >> for audible
fast forward play. Press and hold the multifunction
button << for audible fast rewind play. The relative
time is displayed during this operation and continues
for an additional eight seconds after releasing the
function button.
124 UNDERSTANDING YOUR INSTRUMENT PANEL
previous next