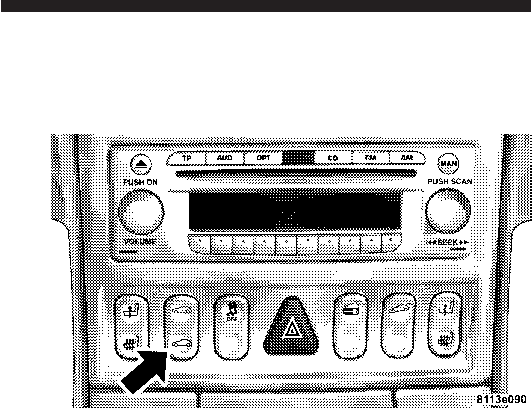 The spoiler control also incorporates an emergency stop
feature. If, for any reason, spoiler motion needs to be
stopped, pressing either the top or bottom of the switch
will stop the spoiler motion. Once the deployment speed
is reached, however, the spoiler deploys to its full up
position.
The spoiler will deploy as a safety precaution if the ESP
system detects a large difference in wheel speed between
the front and rear wheels. This could occur as a result of
a speed signal malfunction, or could occur if the vehicle
is attempting to accelerate on a low friction surface
causing the rear wheels to spin. The spoiler will remain
deployed and the warning light in the spoiler switch will
blink until the vehicle is restarted. If the spoiler continues
to deploy in this fashion below the normal deployment
speed, see your authorized dealer.
Should a malfunction occur that prevents the spoiler
from deploying automatically, a red warning light will
illuminate in the override switch and an audible warning
will sound.
88 UNDERSTANDING THE FEATURES OF YOUR VEHICLE
previous next