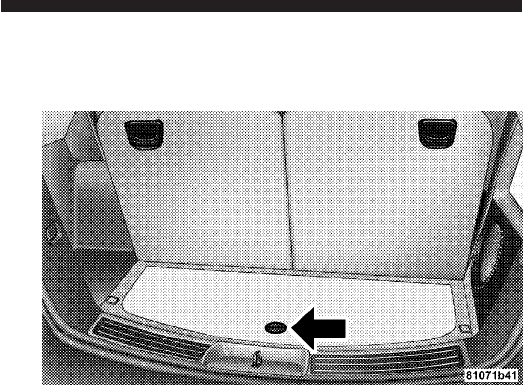 On vehicles equipped with six passenger seating the
second row seat cupholders are located in the forward
edge of the center console located between the second
row seats. Push down on the forward edge of the console
to release the cupholders. Press the cover up when the
cupholders are no longer needed.
Third Row Seat Cupholders — If Equipped
There are cupholders located in each rear trim panel for
the third row seat passengers.
STORAGE
Console Features
The center consoles may be equipped with a tissue
holder mounted on the underside of the cover. The
bottom of the console bins may also have built in holders
for compact discs or cassette tapes.
Rear Cargo Storage Bin — If Equipped
The storage bin is located in the floor of the rear cargo
area. To open lift up on the handle.
Rear Storage Bin
166 UNDERSTANDING THE FEATURES OF YOUR VEHICLE
previous next