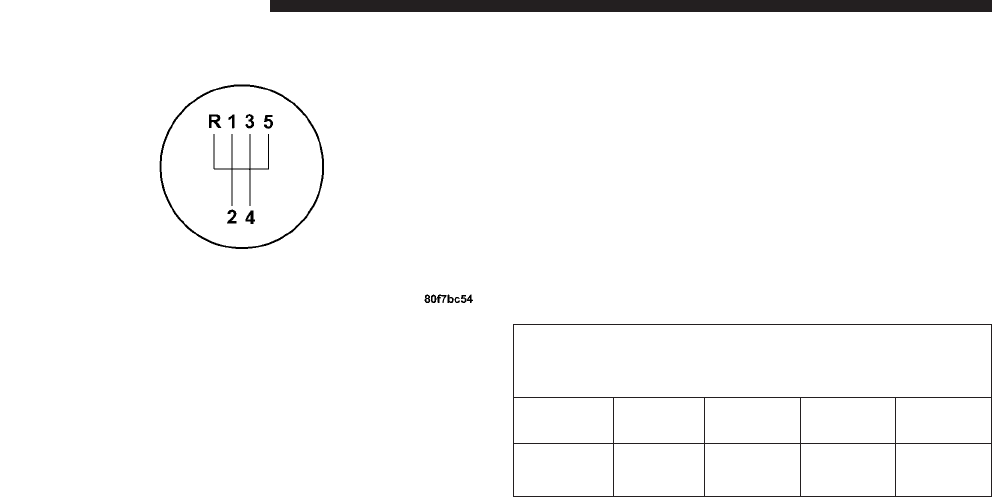 2.4 Liter Turbo— If Equipped
The neutral position of the shift lever is located between
THIRD and FOURTH gear. This is the position the shifter
lever will return to automatically when neutral is se-
lected. When shifting into FIFTH gear, be sure to press
the shifter lever all the way to the right to avoid acciden-
tally selecting THIRD gear. Also, use care when selecting
FIRST gear to avoid accidentally selecting REVERSE.
When moving the shifter lever into REVERSE press the
lever to the left until the resistance is overcome. When the
ignition switch is in the ON position, a chime will sound
to confirm that reverse has been selected and the backup
lights will illuminate.
NOTE: Listen for the audible chime to confirm RE-
VERSE gear is properly selected. Never shift into RE-
VERSE until the vehicle has come to a complete stop.
Recommended Shift Speeds
To use your manual transaxle for optimal fuel economy,
it should be upshifted as listed in table 1.
TABLE 1-MANUAL TRANSAXLE NORMAL
ACCELERATION AND CRUISE SHIFT SPEEDS
IN mph (km/h)
ENGINE
SIZE
1to2 2to3 3to4 4to5
2.4L
15 25 33 44
(24) (40) (53) (70)
190 STARTING AND OPERATING
previous next