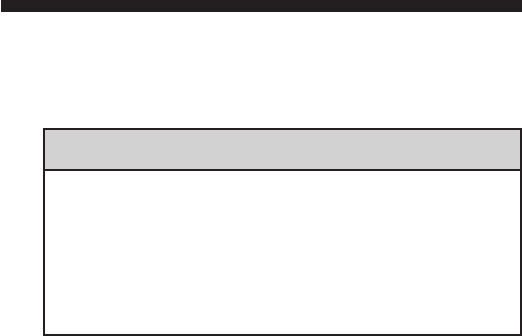 Press and hold the button in the center of the sunroof
switch to open the vent. The sunroof can be stopped at
any position between closed and full vent. To close the
sunroof from the vent position, press and hold the switch
forward. Releasing the switch will stop the movement of
the sunroof and the sunroof will remain in the partial
vent position until the switch is pushed forward again.
Express Open Feature
During the Express Open operation, any movement of
the switch will stop the sunroof and it will remain in a
partial open position. Again, momentarily pressing the
switch rearward will activate the Express Open Feature.
To close the sunroof, hold the switch in the forward
position. Again, any release of the switch will stop the
movement and the sunroof will remain in a partial open
condition until the switch is pushed forward again.
The sunshade can be opened manually. It will also open
as the sunroof opens. The sunshade cannot be closed if
the sunroof is open.
WARNING!
Never leave children in a vehicle, with the keys in
the ignition switch. Occupants, particularly unat-
tended children, can become entrapped by the
power sunroof while operating the power sunroof
switch. Such entrapment may result in serious injury
or death.
200 UNDERSTANDING THE FEATURES OF YOUR VEHICLE
previous next