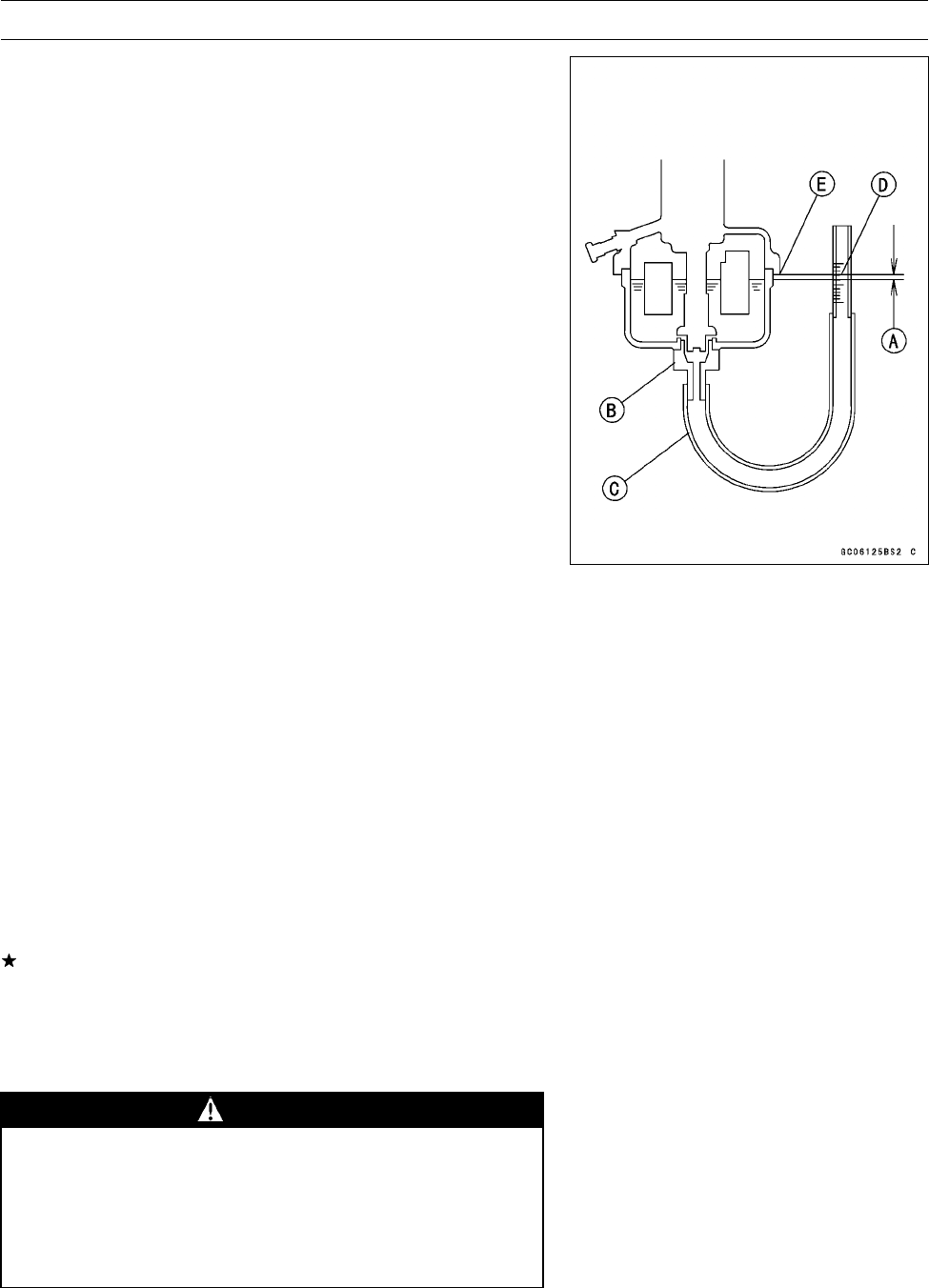 2-8 FUEL SYSTEM
Carburetor
•
Remove the carburetor, and hold it in true vertical position
on a stand. The fuel hose and carburetor cable do not
have to be removed to inspect the fuel level [A].
•
Put the fuel tank on a bench, and connect the fuel tap to
the carburetor using a suitable hose.
•
Remove the drain plug from the bottom of the float bowl,
and screw a fuel level gauge adapter [B] into the drain
plug hole.
•
Connect of the graduated cylinder & tube [C] to fuel level
gauge adapter.
Special Tools - Fuel Level Gauge Adapter M 16 × 1: 57001
-1661
Graduated Cylinder & Tube: 57001-1584
•
Hold the gauge vertically against the side of the carbure-
tor body so that the "zero" line [D] is several millimeters
higher than the bottom edge [E] of the carburetor body.
•
Turn the fuel tap to the ON position to feed fuel to the
carburetor.
•
Wait until the fuel level in the gauge settles.
•
Keeping the gauge vertical, slowly lower the gauge until
the "zero" line is even with the bottom edge of the carbu-
retor body.
NOTE
○
Do not lower the "zero" line below the bottom edge of
the carburetor body. If the gauge is lowered and then
raised again, the fuel level measure shows somewhat
higher than the actual fuel level. If the gauge is lowered
too far, dump the fuel out of it into a suitable container
and start the procedure over again.
•
Read the fuel level in the gauge and compare it to the
specification.
Service Fuel Level (below the bottom edge of the carb.
body)
Standard: 0.5 ±1 mm
If the fuel level is incorrect, adjust it.
•
Turn the fuel tap to the OFF position and remove the fuel
level gauge.
•
Install the drain plug on the bottom of the float bowl.
Service Fuel Level Adjustment
WARNING
Gasoline is extremely flammable and can be ex-
plosive under certain conditions. Always stop the
engine and do not smoke. Make sure the area is
well-ventilated and free from any source of flame
or sparks; this includes any appliance with a pilot
light.
•
Remove the carburetor, and drain the fuel into a suitable
container.
•
Remove the float bowl.
previous next