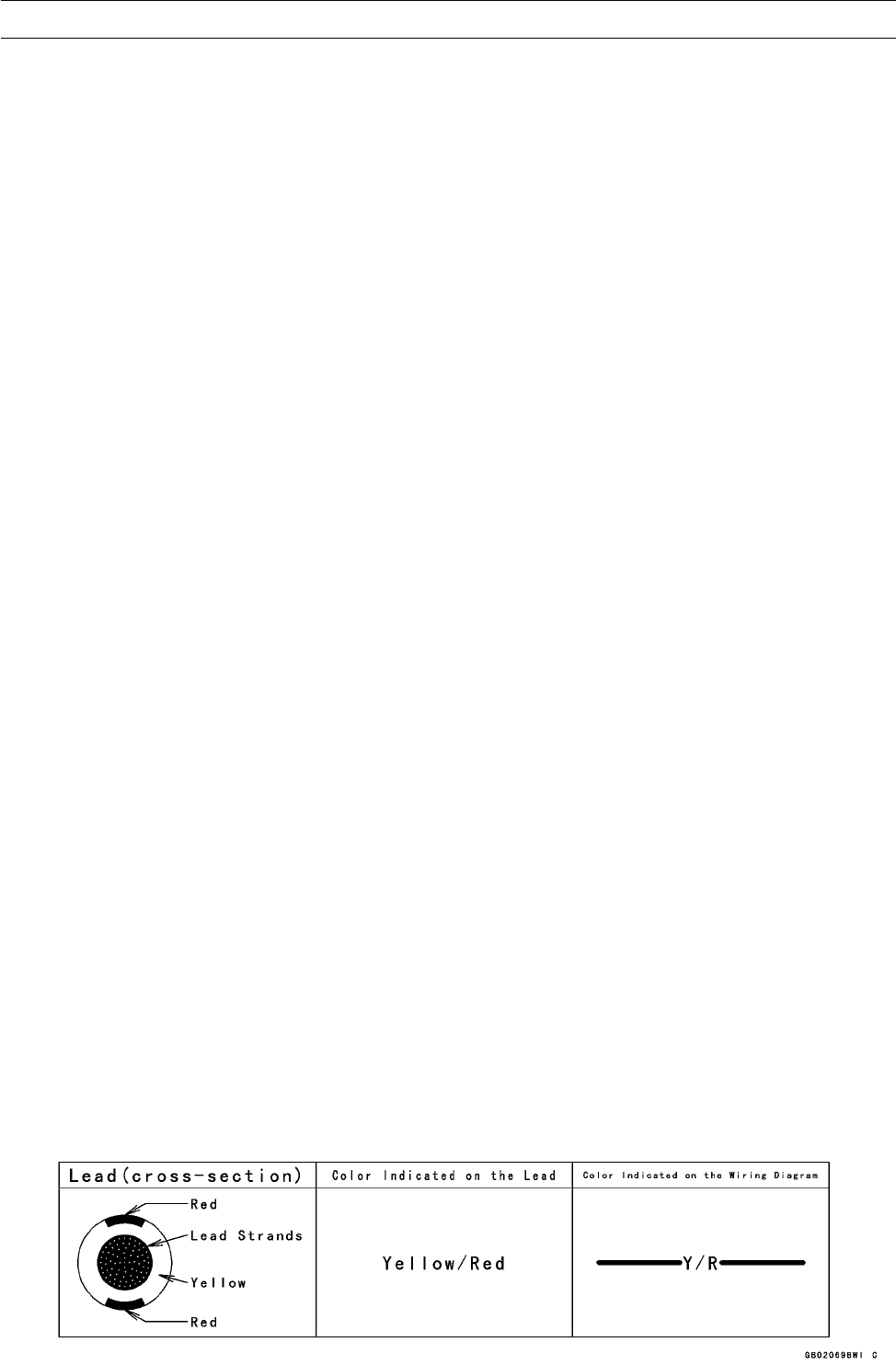 GENERAL INFORMATION 1-3
Before Servicing
(11)Press
When using a press or driver to install a part such as a wheel bearing, apply a small amount of
oil to the area where the two parts come in contact to ensure a smooth fit.
(12)Ball Bearing and Needle Bearing
Do not remove a ball bearing or a needle bearing unless it is absolutely necessary. Replace any
ball or needle bearings that were removed with new ones. Install bearings with the manufacturer
and size marks facing out, applying pressure evenly with a suitable driver. Apply force only to the
end of the race that contacts the press fit portion, and press it evenly over the base component.
(13)Oil Seal and Grease Seal
Replace any oil or grease seals that were removed with new ones, as removal generally dam-
ages seals. Oil or grease seals should be pressed into place using a suitable driver, applying a
force uniformly to the end of seal until the face of the seal is even with the end of the hole, unless
instructed otherwise. When pressing in an oil or grease seal which has manufacturer’s marks,
press it in with the marks facing out.
(14)Circlip, R etaining Ring, and Cotter Pin
When installing circlips and retaining rings, take care to compress or expand them only enough
to install them and no more. Install the circlip with its chamfered side facing load side as well.
Replace any circlips, retaining rings, and cotter pins that were removed with new ones, as re-
moval weakens and deforms them. If old ones are reused, they could become detached while
the motorcycle is driven, leading to a major problem.
(15)Lubrication
Engine wear is generally at its maximum while the engine is warming up and before all the sliding
surfaces have an adequate lubricative film. During assembly, make sure to apply oil to any sliding
surface or bearing that has been cleaned. Old grease or dirty oil could have lost its lubricative
quality and may contain foreign particles that act as abrasives; therefore, make sure to wipe it off
and apply fresh grease or oil. Some oils and greases in particular should be used only in certain
applications and may be harmful if used in an application for which they are not intended.
(16)Direction of Engine Rotation
To rotate the crankshaft manually, make sure to do so in the direction of positive rotation. Pos-
itive rotation is counterclockwise as viewed from the left side of the engine. To carry out proper
adjustment, it is furthermore necessary to rotate the engine in the direction of positive rotation as
well.
(17)Replacement Parts
When there is a replacement instruction, replace these parts with new ones every time they are
removed.
Replacement parts will be damaged or lose their original function once they are removed. There-
fore, always replace these parts with new ones every time they are removed. Although the pre-
viously mentioned gasket, O-ring, ball bearing, needle bearing, grease seal, oil seal, circlip, and
cotter pin have not been so designated in their respective text, they are replacement parts.
(18)Electrical Leads
All the electrical leads are either one-color or two-color. A two-color lead is identified first by
the primary color and then the stripe color. For example, a yellow lead with thin red stripes is
referred to as a “yellow/red” lead; it would be a “red/yellow” lead if the colors were reversed.
Unless instructed otherwise, electrical leads must be connected to leads of the same color.
Two-Color Electrical
previous next